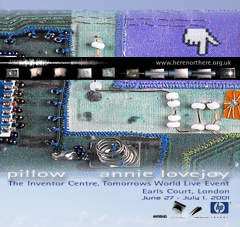 A sample for the electronic blanket, a starting point for research and development of new work which is envisaged as a content provider utilising various electronic circuits to display audio / visual and interactive material. An exploration of emergent and redundant technologies,the prolification of components / hardware and data is intricately embroidered ..a tapestry of systems.

The pillow 'movie' includes audio & visual extracts from the ...here nor there... archive, audio sample from Eludea, fiddle by Gina Griffin.

"I find the inclusion of 'pillow' in HP's Inventor Centre at Earls Court intriguing, it appears to demonstrate the power of aesthetics to trigger the imagination through the merging of art and the science of technology." Annie Lovejoy

participate in an on-line version of 'pillow'
created by Neil Jenkins. 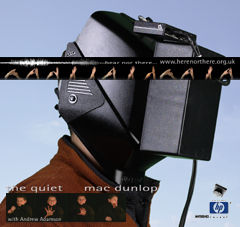 "The helmet started out as a parody of 'vitual reality', I wanted to make a kind of 'video diary' helmet.

At one point in the process, I had the idea to ask Andrew Adamson - a 13 year old neighbour who is hearing impaired - if he would translate a poem into British Sign Language for the video element of the helmet. In doing the shoot, it was apparent that Andrew enjoyed embellishing the poem to tell it as his own story. So it seemed sensible to invite him to tell a story of his own.

His story is about a motorcyle incident, using both British Sign Language and voice, complete with his own sound effects. Watching and hearing him tell the story is a reminder that we each have our own 'voice', our own langauge, even if it is just "in our head".

The helmet itself, is an imperfect combination of image and sound, to see him tell the story, you need to hold the helmet a little away fromyourself, but to hear the sound you have to be closer and wear the helmet. I hope this paradox in some way illustrates how we can easily take langauge and communication for granted.

I am currently working with Andrew and his Grandfather on building a web site, which we hope will be of use to the Bristol hearing impaired community." Mac Dunlop